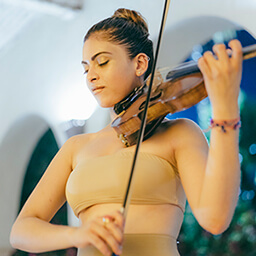 Tunisian/British Violinist, Composer and Singer Yasmine Azaiez studied at the prestigious Yehudi Menuhin School in the UK then went on to study at the New England Conservatory in Boston.

Well versed in a diverse array of genres such as Experimental, Jazz, Rock and North African music, she has performed in venues such as The Royal Albert Hall UK, The Cultural Center in Beijing China , Bimhuis in Amsterdam, The Cairo Royal Opera House in Egypt, Jordan Hall in Boston USA, and The Royal Opera house of Oman, the Olympic Games in the UK amongst many others.

Stream our top featured singles and albums, don’t forget to buy if you ♥

Follow me on Instagram for future concerts and events.
Get a chance to win a free ticket 😘